There’s no city quite like the capital of China. Honestly, we’ve traveled all of Asia and really struggled in this city. If we could go back, we would’ve hired a structured tour that arranged all our transportation and food, as we had a VERY hard time finding food, communicating and navigating. You don’t need more than 3 full days in Beijing (we stayed 5 and it was beyond way too long).

Looking to go to other parts of China? Check out my Blog Posts from Hong Kong!

When To Go To Beijing:

The capital city is great for travel year round, but September to November is the best season to visit.

How To Get Around:

Getting around was really tough for us, as each mode of transportation was SO challenging (mostly due to language barriers), which is why we recommend going with a tour company that takes care of it all.

Taxi: Taxis are readily available all around the city, but MAKE SURE your driver will use a meter. Many times a taxi driver tried to solicit us with a ‘set price’ once we told him our destination, which ended up being at least triple the price it would’ve been with a meter.

Subway: The least expensive way to get around the city, although the subway lines are difficult to navigate.

Tuk Tuk: Just like taxis, these are available all around the city. Be SURE to negotiate the rate with the driver prior to getting in and going. We had a driver demand $40USD for a 2 mile ride, who then gave us fake Chinese currency for change once we paid.

Walking: Many times we became so frustrated with taxi and tuk tuk drivers trying to take advantage of us, that we ended up walking.

Where To Stay In Beijing: 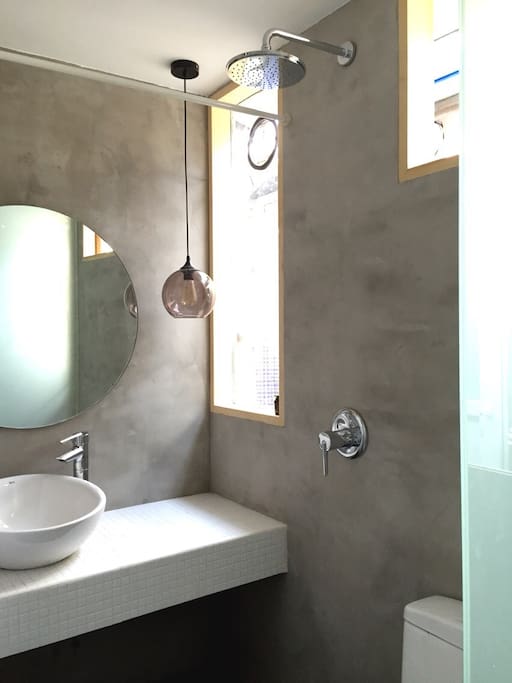 For an authentic experience, there’s no better place to stay than at Lily’s Hutong Airbnb. A Hutong is the traditional housing of Beijing…it’s a type of narrow street or alleyway with courtyard residences.  Lily’s Hutong has been remodeled into a loft and is totally chic (she’s an interior designer), with modern amenities. It’s in an amazing, safe location, located just a 10 minute walk from the Forbidden City. Not to mention she’s one of the BEST Airbnb hosts we’ve ever had…she even took us to a traditional peking duck for dinner the first night! $46USD/night

If you’re looking for more of an accommodating experience, the Novotel Xinquiao Beijing is the BEST option. It’s located in the CBD (central business district), the central area of town with all the best restaurants, malls and shops. $64USD/night.

What To Do In Beijing:

We hired a private driver for $116USD for entire day trip to Great Wall and Summer Palace, but there is a bus system that can take you as well, if you’re looking for something more affordable.

Great Wall of China at Mutianyu: 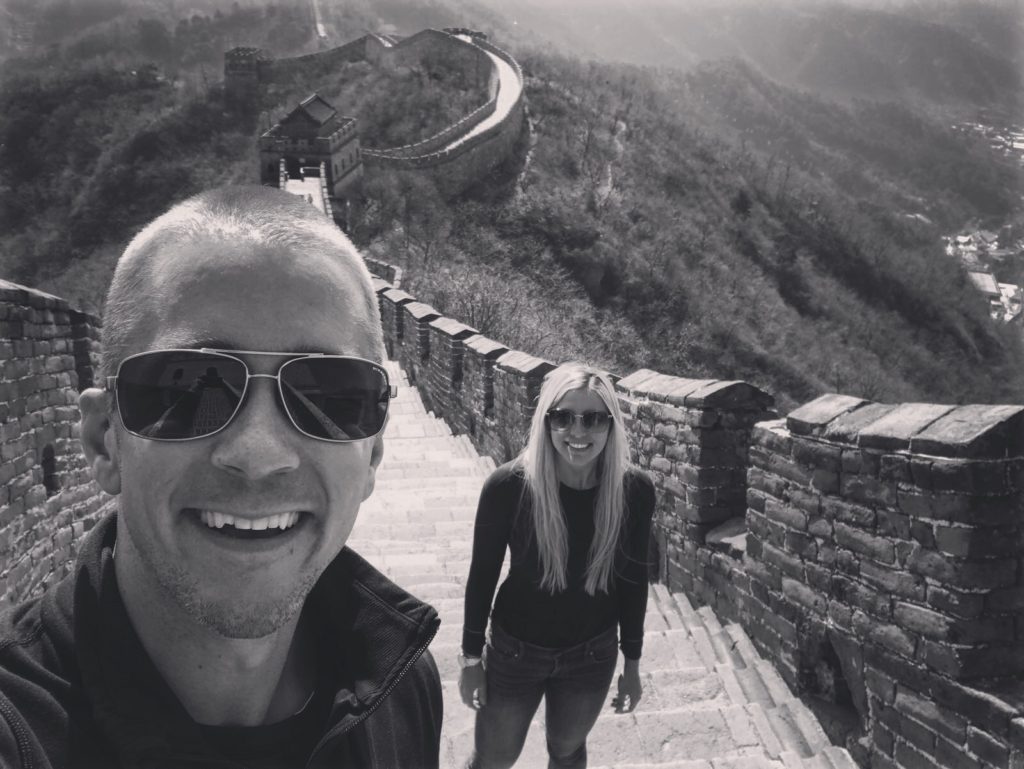 If time and budget permit and you want to go to a section of the Great Wall of China that is not overrun by tourists, then head 40 miles (65km) north of Beijing City to the Great Wall At Mutianyu. You have can take the Gondola up and back or, if you’re feeling adventurous, you can ride the Luge back down. It’s best to take Gondola up and the ski lift or luge back down, so you don’t have to back track on the wall. You can always purchase a one way ticket up the to the top and decide later. There are multiple areas where you can purchase snacks, water and beer along the way. Be SURE to leave Beijing very early (6:30am) for the 2+ hour journey there. Cost for the cableway roundtrip is $100CNY ($14.50USD) and if you take the lift up and luge down, it’s $100CNY ($14.50USD). 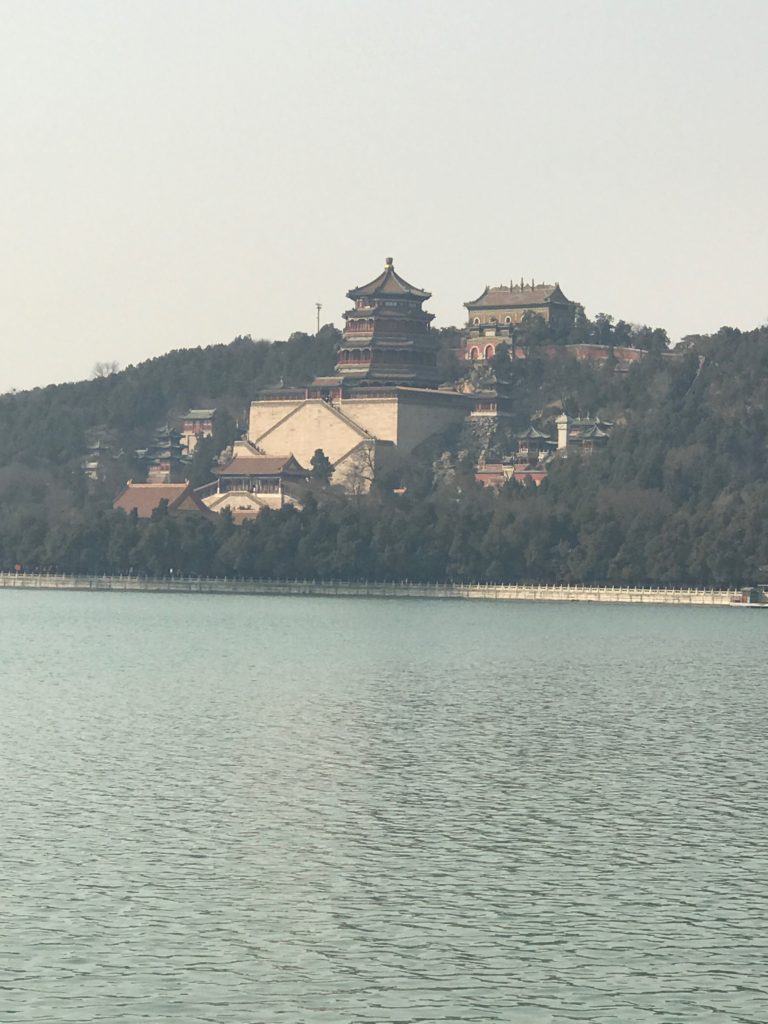 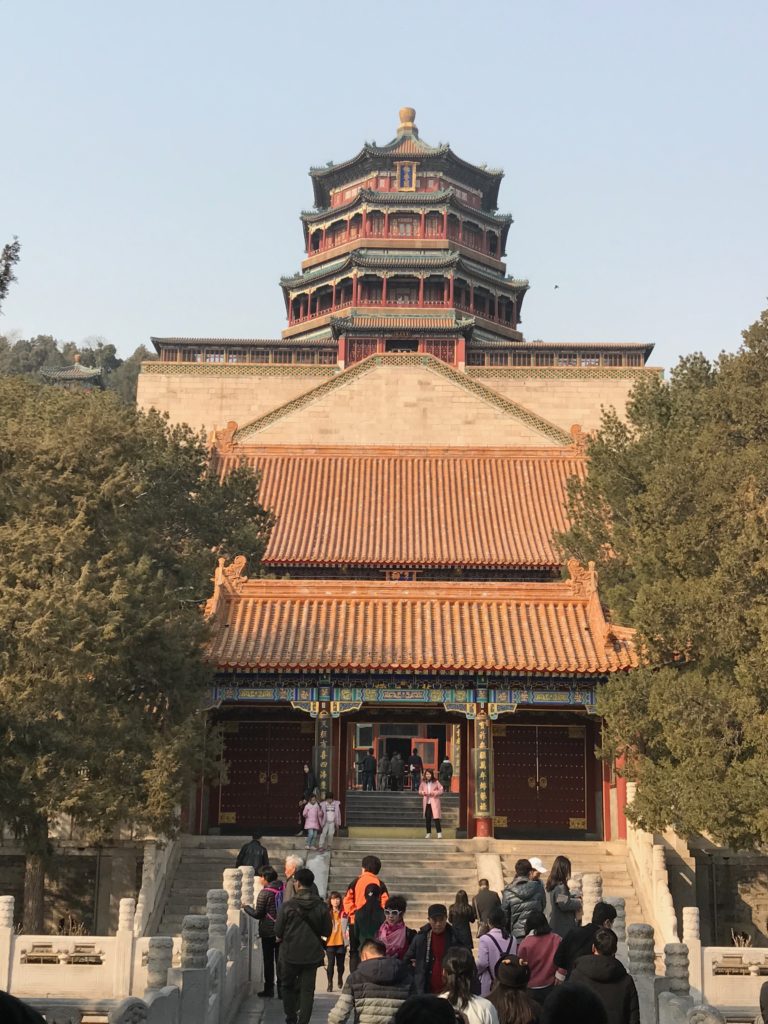 The spectacular Summer Palace is located 9 miles (15km) from downtown and 1.5 hours by car from the Great Wall at Mutianyu. It is the cities most well-preserved royal park. The cost per entry is between $60CNY ($8.70USD) and $50CNY ($7.25USD), depending on the season. 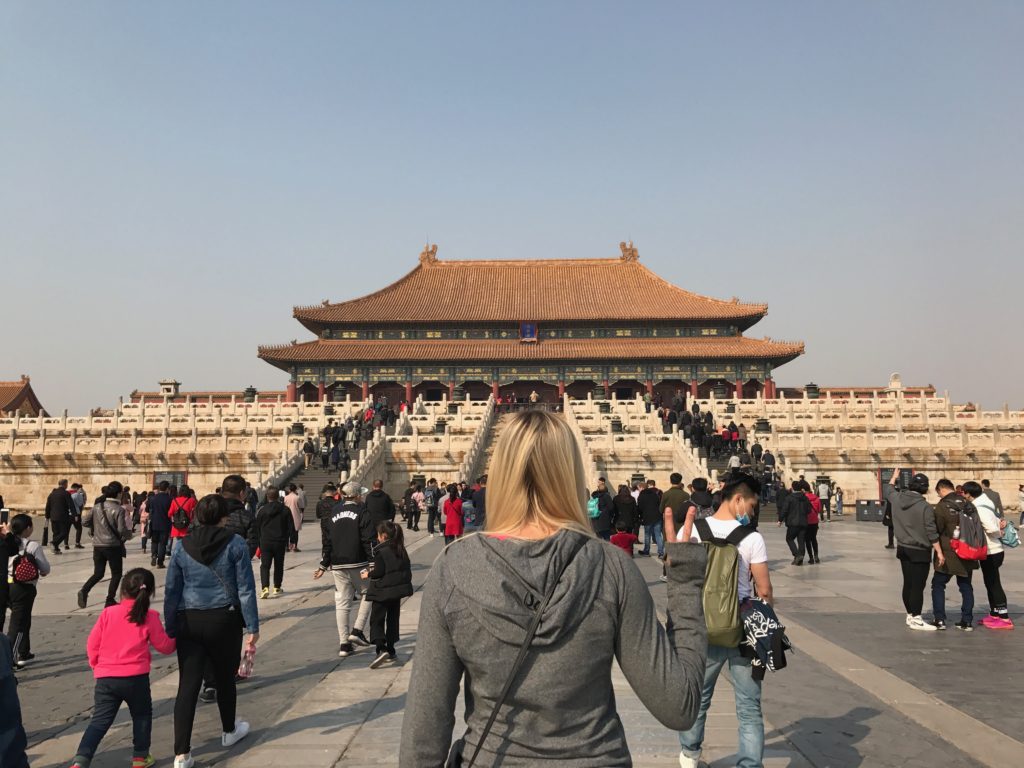 The Forbidden City is a MASSIVE area of land that served as the imperial palace for 24 emperors in China. It’s the world’s largest palace complex and covers 74 hectares, is surrounded by a 52 meter wide moat and a 10 meter high wall, with more than 8,700 rooms. Do note there is no western food inside, only one Chinese Restaurant and a few small snack stands with beverages and cookies, so be sure to eat prior to going and bring snacks! BE SURE TO BRING YOUR PASSPORT, as they won’t allow you in without identification! You can also pickup headsets (in English) that will give you a lot of info as you walk around ($40CNY/$6USD). Cost per entry is between $60CNY ($8.70USD) and $40CNY ($5.80USD), depending on the season. 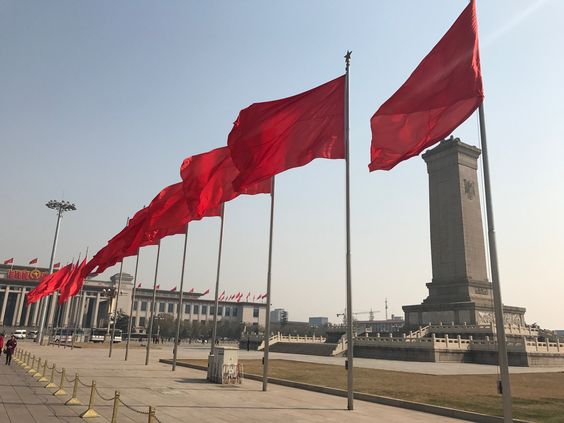 Tiananmen Square is a large area just in front of the entrance of the Forbidden City. Here you can witness the national flag raising ceremony,  but you’ll have to get up really early and arrive prior to sunrise. Cost per entry is Free, but $15CNY ($2.18USD) to enter Tiananmen Tower. 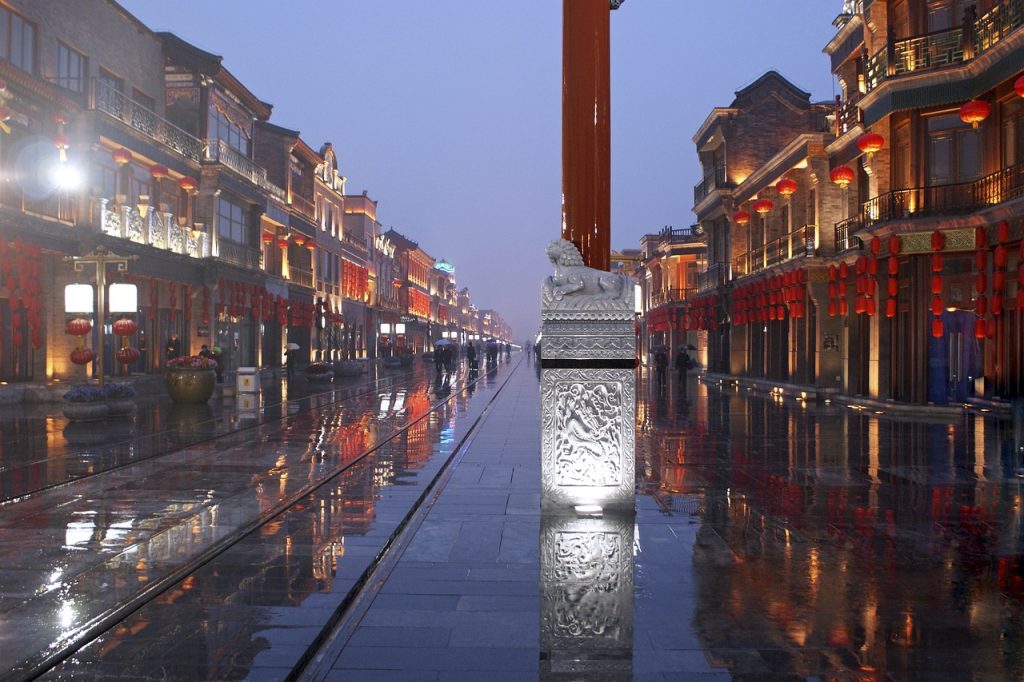 The most famous pedestrian street in the whole city, Qianmen Street is full of restaurants, shopping, souvenirs, and one of the coolest Starbucks I’ve ever been to. 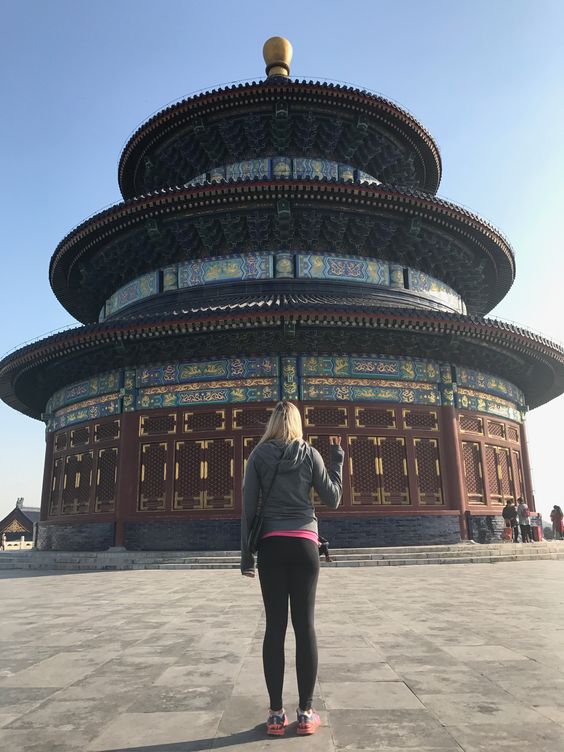 The Temple of Heaven is a sacrificial buidling where emperors of the Ming and Qing Dynasty held the Heaven Worship Ceremony. To see the imperial vault of heaven, the cost per entry is between  $10CNY($1.45USD) and $20CNY ($2.90USD) , depending  on the season. Do note that you’ll need to pay for entry to each additional attraction inside.

Also known as the ‘Birds Nest,’ Beijing National Stadium hosted the 2008 Summer Olympics and is an architectural site to see.  Be sure to go at night, as it’s gorgeous when it’s all lit up, but you won’t be able to go inside, as it will already be closed. Cost per entry is $50CNY ($7.25USD).

One of the most popular streets in the entire city for shopping is Wangfujing Street. There are countless amounts of shops and malls here, including APM Mall, which has an Apple Store and many other western retail stores.

What To Eat In Beijing:

The capital city is famous for it’s Peking Roast Duck, and we totally understand why. The crispy texture with mouthwatering flavor are something unforgettable. It’s served with crepe-like pitas to wrap up with bean paste, cucumbers, spring onions and sugar.  Luckily, there are restaurants that serve the dish on every corner in the city, so you won’t have trouble finding it!

Chinese dumplings are a must eat while in the city. You can have them steamed, friend or in soup.

Another famous Chinese dish, hot pot is a fun meal whereby meat and veggies are added to a ‘hot pot’ of flavored soup and cooked right in front of you.

One of the best gyms we’ve been to while traveling Asia, Hero Fitness Club was affordable and had awesome equipment. It’s located inside the New World Beijing Mall, Floor 5. Cost per 1 Day is $50CNY ($7.25USD) and 1 week $350NCY ($50USD).

Things To Note About Beijing, China:

There is no Google, Facebook, Instagram or Snapchat in China. Use Baidu instead of Google as your search engine while there. Download Maps.Me app prior to arrival.

Download google translate prior to coming, it’ll help SO much!

Hire a tour if you’re going coming here, it’ll make your life simple and easy. Roam China came highly recommended to us and we wished we would’ve used them. 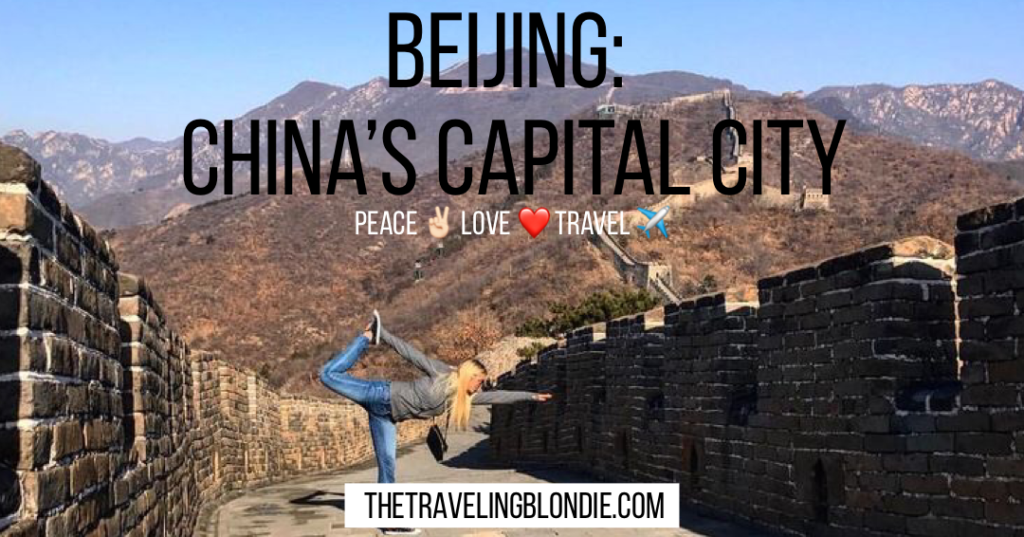 I’m always SO grateful for feedback or ANY travel questions you may have! Feel free to hit me up on Instagram, Facebook or Pinterest @thetravelingblondie or email me at [email protected]

Hi! I’m Nichole, AKA The Traveling Blondie! I spent the past four years exploring Asia & Europe and now I’m living it up in Miami with Central & South America as my next destinations. Thank you SO much for for stopping by my page and Happy Travels!