An incredibly kind man we met at airport security in Budapest asked us where we were heading. We told him to the great city of Rome. His response: ‘Rome is an Open Museum everywhere you look,’ and I couldn’t agree more!

When To Go To Rome:

There is never a bad time to visit Rome, although the summer months are packed full of tourists and it can be quite hot. I’d suggest the spring and fall months, which offers cooler temperatures and less crowds. We visited during the month of December and never waited in any lines, plus the city is decorated for Christmas and it’s the most beautiful sight! 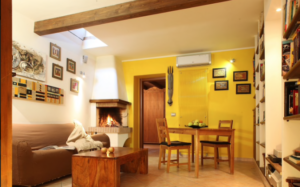 We are always faithful users of Airbnb, because I LOVE to cook and we always have Miesha with us (our fluffy dog). Our Airbnb in Monterotondo was the MOST UNIQUE Airbnb we’ve ever stayed in because it was in a small village outside of Rome, called Monterotondo! Obviously, if you’re just visiting Rome for a few days, then staying in Monterotondo is not a good idea, but, if you have extra time like we did (we spent a month there), it’s the most perfect location and much more cost affective!

Monterotondo and this Airbnb are as authentic as an Italian village gets, located 30-minutes driving from Rome and about 1+ hour by train. It is a quaint little village, bustling with a young crowd, bars, restaurants and hilly cobblestone streets.   We LOVE staying in local neighborhoods when we travel, as we get more of a traveller experience instead of just being tourists and this Airbnb was a perfect fit for what we wanted.

How To Get Around Rome:

Subway: If you’re staying in the city, you’ll come to find that the subway system is not super efficient, as it was constructed to not reach many of the main areas in order to preserve them. Be mindful of your pockets and bags while riding the subway, as it is well known for pickpockets. We found the subway to be timely, clean and efficient enough for our visit.

Walking: Rome is such an incredibly gorgeous city and there is no better way to see it than by strolling around it’s streets. It’s best to wear proper walking shoes, as many of the streets are made of cobblestone and could be tough for heels, etc.

Train: We stayed outside the city, so we frequented Tren Italia, which we were very impressed with. You can use this train to travel all over the country at affordable rates. The train is timely, efficient and decently priced. It’s a great idea to take the train from Tiburtina Main Station to the Fiumicino Airport, which is a journey of just under one hour and costs about 8 Euros ($9.75USD). There are over 50 trains daily that go to and from the airport to TIburtina, but it’s always good to reserve ahead of time, especially in busy season.

Bus: The public bus system is quite efficient and we rode the bus several times on the one hour journey from Monterotondo to Roma Tiburtina, at a far less cost than the train.

Taxi/UBER: Rome is the only city we’ve been where Uber’s were more expensive than taxis. We never used either and had no trouble with walking or taking the train and bus.

Where To Eat In Rome:

There is no shortage of food in this great city and, if you’re like us, Italian food is the cuisine of our dreams!  We barely scratched the surface with restaurants here, but I’ll share what we did eat and love!

A little gem of a restaurant near Piazza Navona, not only does Cul De Sac offers up delicious pasta, but also meats, cheese and the largest wine menu we’ve ever seen (it’s literally a book)!

Located in the Trastevere District and loved by locals and tourists alike, Dar Poeta offers up some of the best pizza you’ll ever eat!

Bafetto is Roman style pizza at its finest… bring on the carb load!

There are no words to describe just how good FataMorgana Gelato really is.

What To Do In Rome:

If you only do one recommendation of mine on your entire trip, let Welcome To Rome be it! It’s recommended to visit this multimedia experience at the beginning of your trip to Rome, but we visited it at the end, and it was really incredible to see the 2700 years of history wrapped up in just an hour and a half. Welcome to Rome basically put all of the sights we’d seen during our visit all together using 4D video projections, narrations, Holograms and interactive exhibits. DO NOT MISS THIS ONE! Cost per entry is 12 Euros per ticket and tickets can be purchased beforehand online.

Oh the GREAT Colosseum and Roman Forum! No caption is really needed here. It’s best to buy tickets before going to avoid the hagglers that skower around the perimeter. I think we must have been haggled 50 times before entering. Your ticket purchase of 12 Euros to the Colosseum includes entry to the Roman Forum as well.

Located just a short walk from the Colosseum and Roman Forum in Piazza Venezia, the Altare Della Patria is a vast building that was constructed in 1911 as a monument built in honor of Victor Emmanuel, the first king of a united Italy. It currently houses the tomb of the unknown soldier. Be sure to head up to the panoramic terrace, if you go inside, for epic views of the city. Cost per entry is 7 Euros, but we just admired from the exterior.

Did you know that more than $1.5 million dollars is thrown into the Trevi Fountain each year and all of it is donated to Caritas, a local catholic charity, who uses the money to provide serves for needy families in Rome. You cannot miss this great, iconic fountain, but beware that it is VERY crowded-even when we went in the off season!

The Spanish Steps are comprised of 135 steps and were constructed in 1723 to connect Piazza Di Spagna to the Trinita dei Monti Church. We enjoyed just relaxing and sitting on the steps, people watching and taking in the atmosphere.

Constructed in 113AD, the magnificent Pantheon is a former temple turned to church. Look for the bee somewhere in between the columns…if you find it, it will bring good lucky! Fun Fact: At about 142 feet in diameter, the dome of the Pantheon in Rome is bigger even than the dome of St. Peter’s Basilica and is also completely unreinforced,  making it the single largest unreinforced, concrete dome in the entire world.

Piazza Navona is an absolutely beautiful square to roam around and relax in. Usually in December, the largest Christmas market in Rome is held at Piazza Navona. To our disappointment, this year it was put on hold. 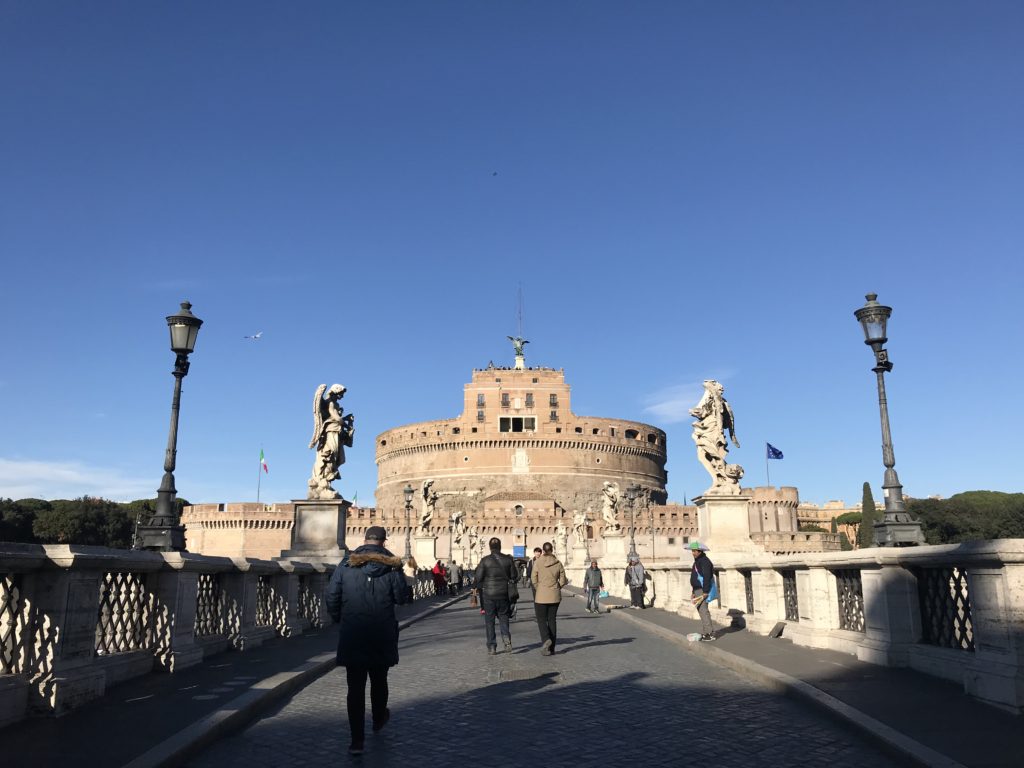 Constructed in 135, the Castle Sant’Angelo is a historical site from the outside, but isn’t recommended for entry, so we skipped it, although there are panoramic views of Rome from the top floor. Cost per entry is 10.50€ ($12.80USD). 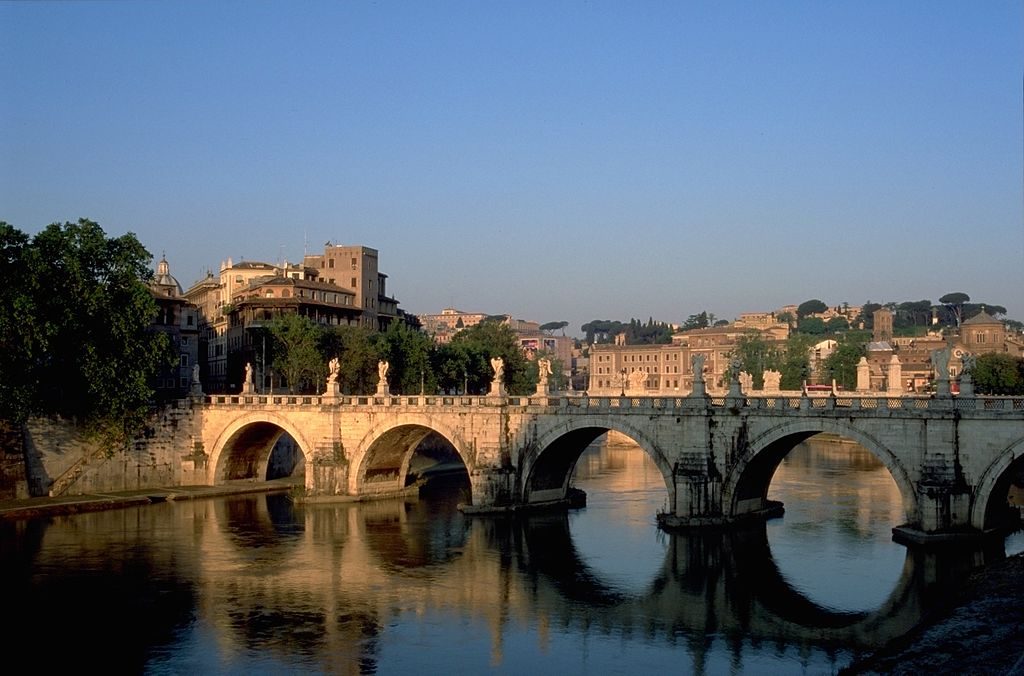 This bridge dates all the way back to 134 AD and crosses the famous Tiber River.  It’s best to cross the bridge on Ponte Vittorio Emanuele II to capture a photo of Ponte Sant’Angelo from a distance. 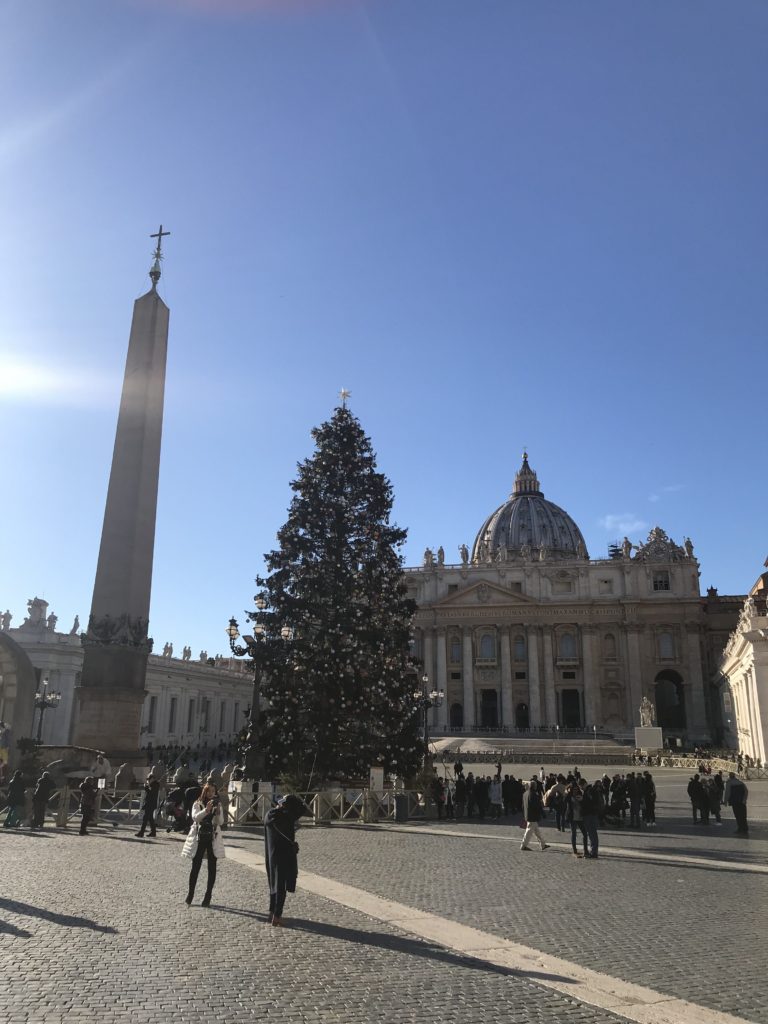 St. Peter’s Square  is such a beautiful sight to see with its clean, circular architectural structure. We spent almost an hour just walking around and taking photos. The queue’s to enter St. Peter’s Basilica were FAR too large for our liking, so we decided not to enter. If you do plan to go, allot for at least 1+ hour waiting time for entry. Be sure to dress appropriately and respectfully for entry to the Basilica. If you happen to be in Rome when the Pope is, he makes an appearance at the window around noon on Sundays. Cost for entry is free. Although, there is an extra fee for the cupola and Vatican Treasury.

The Vatican Museum and Sistine Chapel are truly a place to get lost for hours. One can spend anywhere between 2-6 hours just roaming around and taking it all in. Cost per online ticket purchase entry is 17.00€ + 4.00 additional ($25.62USD) to skip the line (this is totally worth it, unless you go in the off seasons where there are no lines, like we did)

Calling all yogis! If you’re looking for an awesome, zen, yoga studio in Rome, look no further than Zem Yoga.  Zem Yoga is located near Piazza Navona. This little slice of heaven is the perfect studio to recenter before or after exploring the great city.

Rome has 280 fountains and more than 900 churches.

It is thought that over 500,000 people lost their lives and over a million wild animals were killed throughout the duration of the battles at the Colosseum. The last gladiatorial fights took place in 435 AD.

he population of the city of Rome is around 2.7 million. The entire metropolitan area of Rome has an estimated 3.7 million people.

Rome became the capital city of a unified Italy in 1870 after taking the title from Florence.

In Ancient Rome it was common for people to vomit between meals so they could eat more.

When the Roman Empire reached its territorial peak in 117 AD it spanned 2.5 million square miles. Roman husbands kissed their wives on the mouth at the end of the day, but their motives were not at all romantic. They were checking their spouses’ breath to see if they had been sitting around drinking wine all day.