We really loved Seoul, especially the character of the hilly streets, the people, food and, of course, the history. The city is really great because many people speak English, cabs are cheap and public transport is efficient. Of course we barely scratched the surface of Seoul, as we were only there for 3 days…I wish we had longer!

Where to Stay In Seoul:

Itaewon was the district that came highly recommended for us to stay in because of its expat population and central location. We stayed at an Airbnb about 5 minutes walking distance to Itaewon Station, which I’d HIGHLY recommend. The Airbnb host was awesome and the unit was clean, modern and even had heated floors (which was a bonus during the frigid month of February). $55USD/night 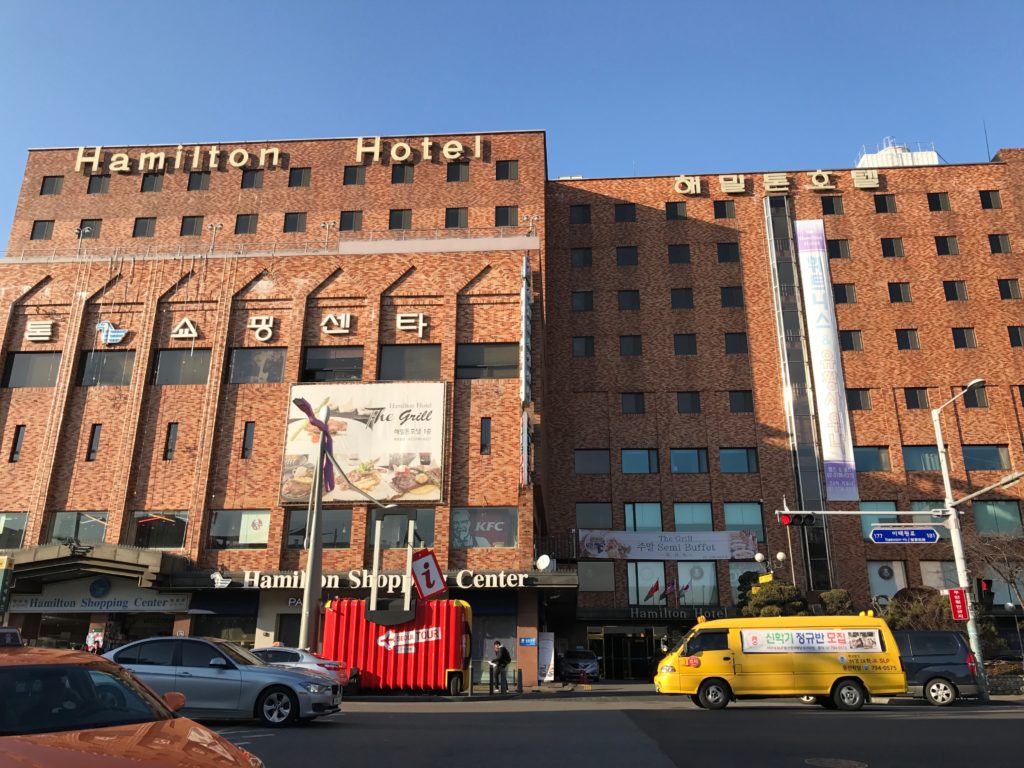 Centrally located with a gym and just about everything else you could want, the Hamilton Hotel was our second choice next to the Airbnb. $90USD/night.

How To Get Around Seoul:

Getting to Itaewon from Seoul Incheon Airport …

Limobus-#6030 to Hamilton hotel, which takes about 2 hours

Getting to Gimpo Airport from Itaewon:

Taxi-20 minutes and $18USD. Bus and subway are also available.

Walking: If you want to save cash, you can certainly walk around parts of Seoul, but it’s a spread out city with destinations quite a distance apart.

Subway: A super affordable way to get around the city. The subway system is quite easy to navigate and there are many English speaking personnel to help out.

Taxi: The WAY to get around the city (especially in chilly months). Taxis are super affordable (in contrast to Japan). A taxi from Itaewon to Seoul Tower (2.5 miles, 15 minutes), was less than $4USD.

What To Do In Seoul: 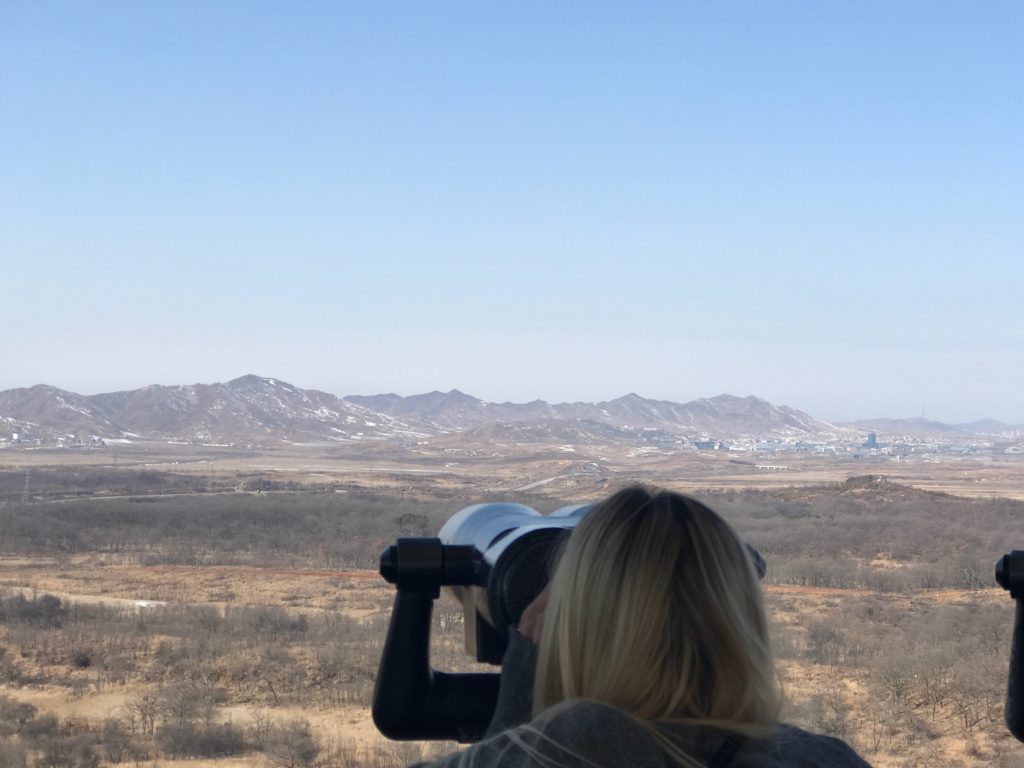 If you only do one attraction in Seoul, the DMZ must be it! The DMZ is a strip of land that roughly divides the Korean Peninsula in half and serves as a buffer zone between North and South Korea. You MUST take a Seoul City DMZ Tour when going there, as security is really tight. DO NOT forget your passport, either, as they won’t let you go without it. The tour includes pickup from your hotel to Imjingak Park, Freedom Bridge, The 3rd Infiltration Tunnel (BEST part-but not fit for those that are claustrophobic), DMZ Theater, Dora Observatory, Dorasan Station, Unification Village Passy by, Amethyst factory or Ginseng Center and return to City Hall. 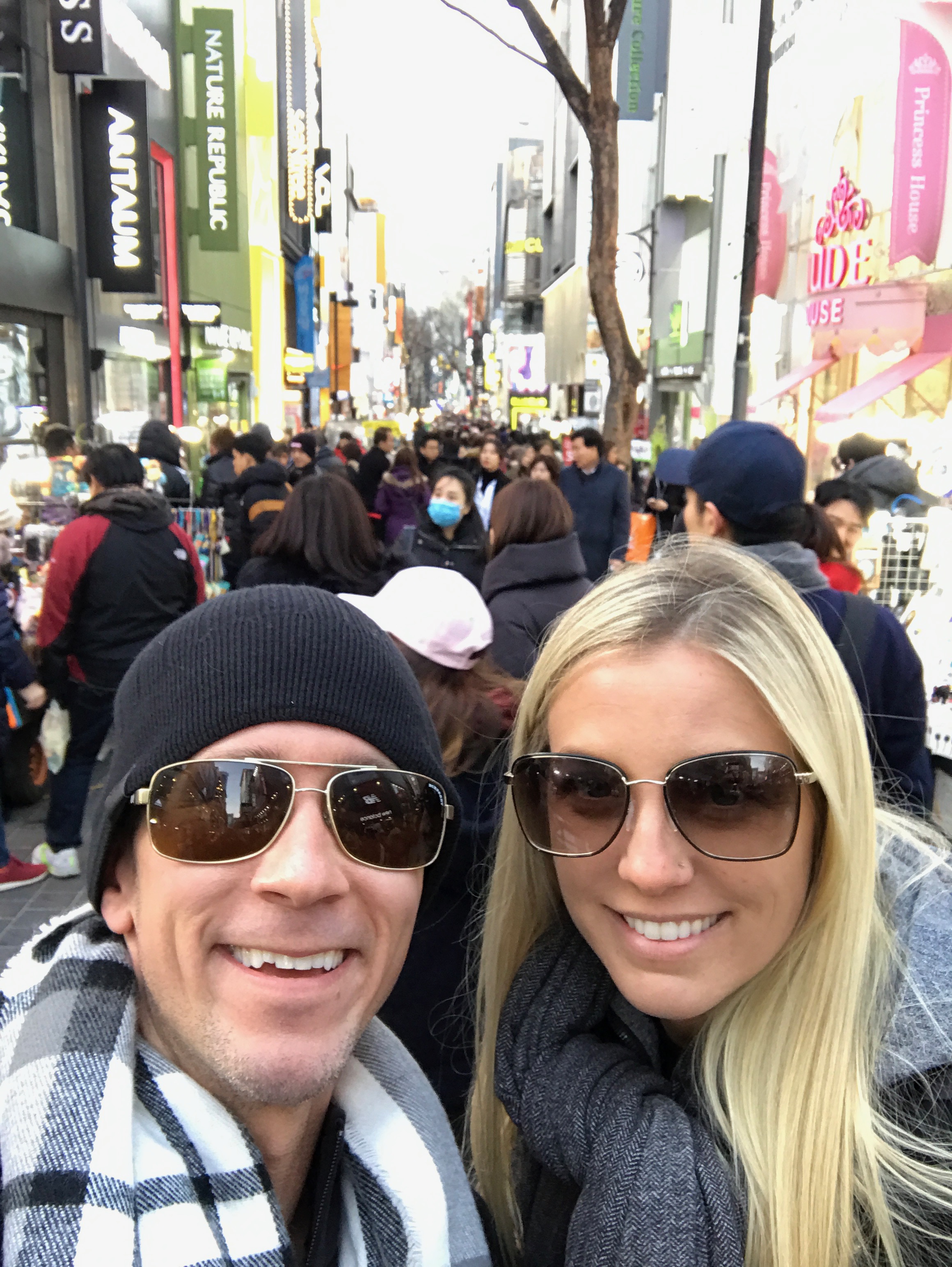 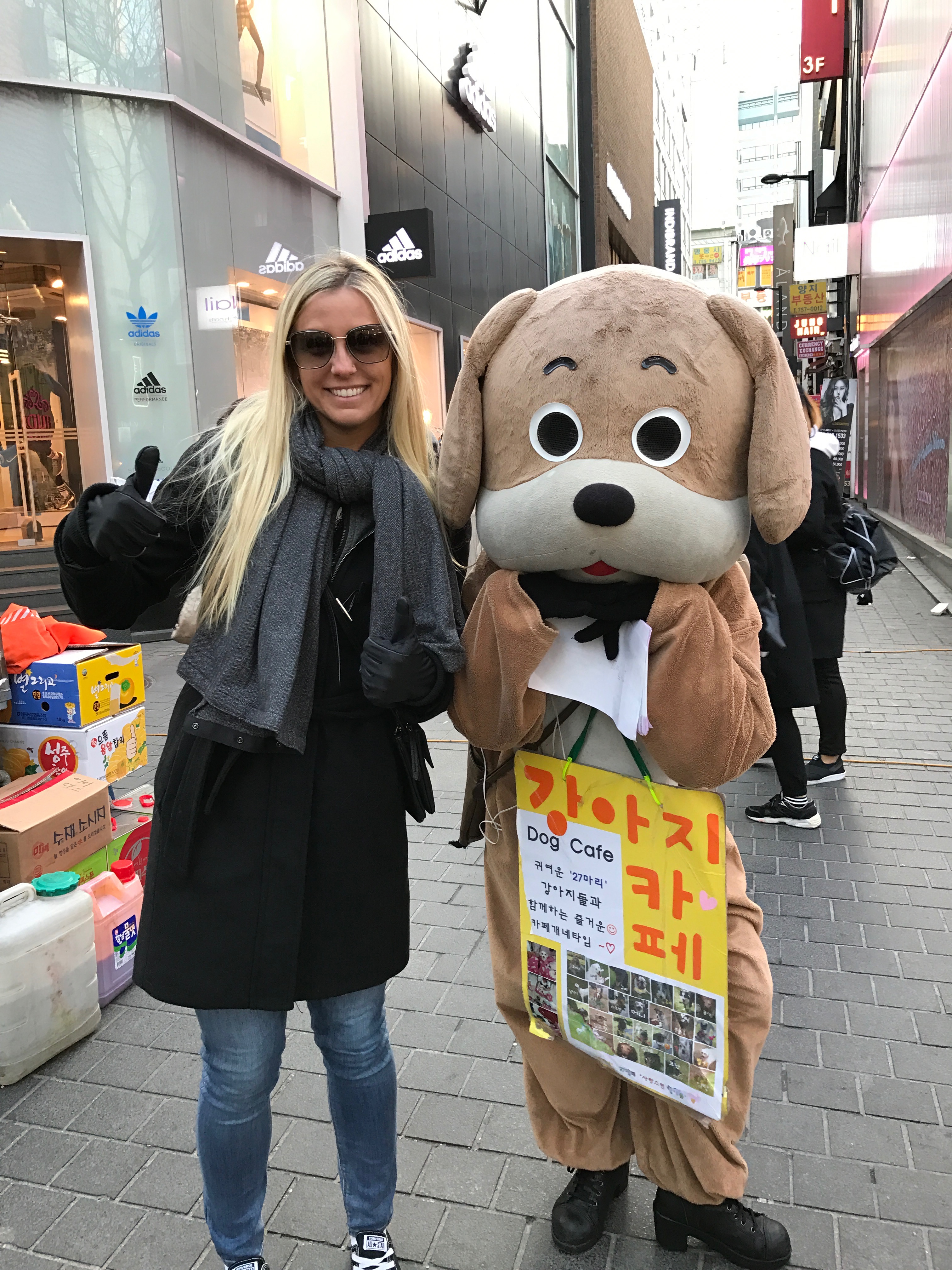 Korea is known for it’s shopping and I totally understand why. Myeongdong District is one of the best districts to do so! It’s brightly lite, colorful, high energy and so SO much going on! It’s also an excellent place to get all your Korean beauty products, shop designer brands, people watch, and eat street food! 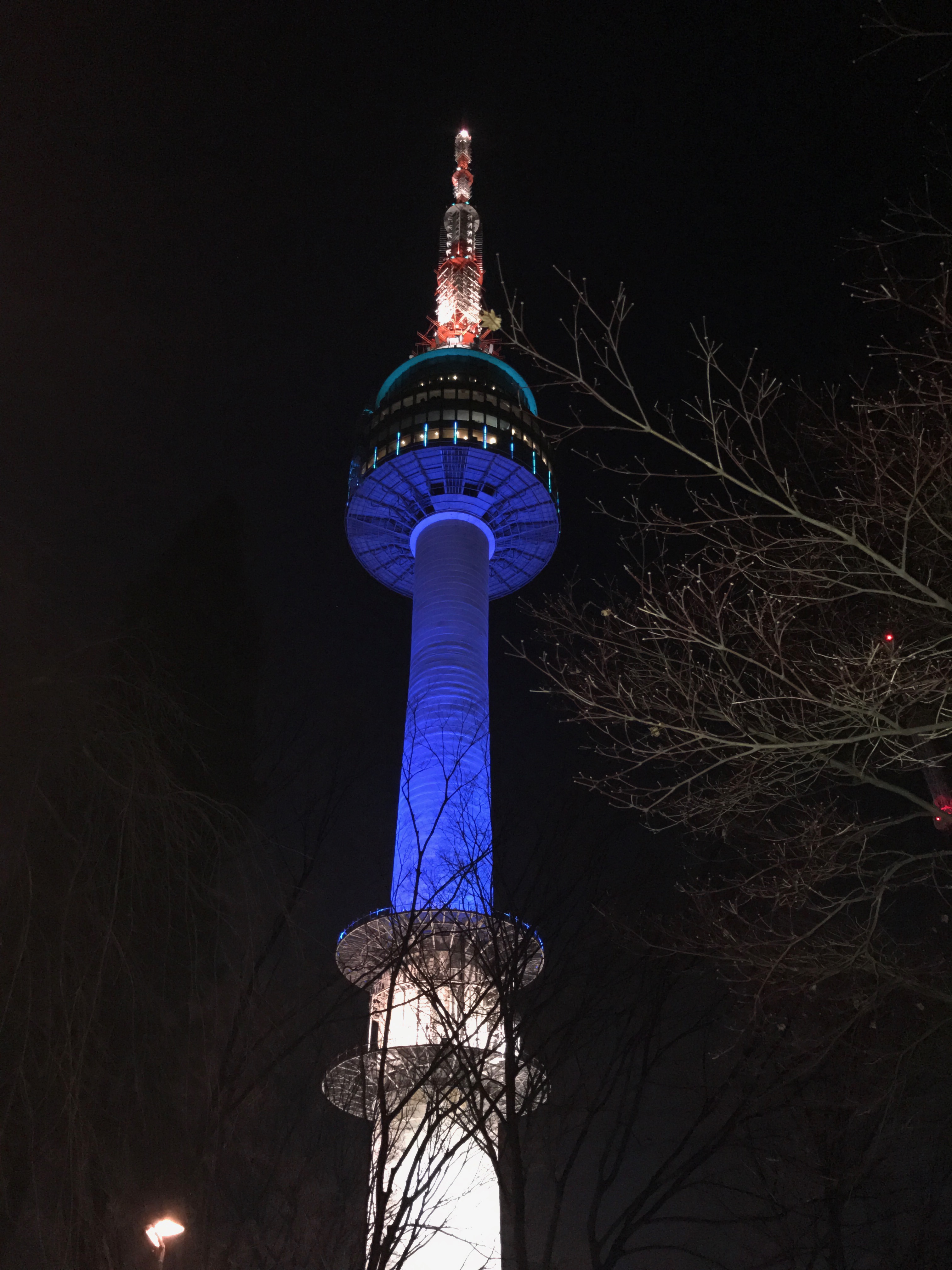 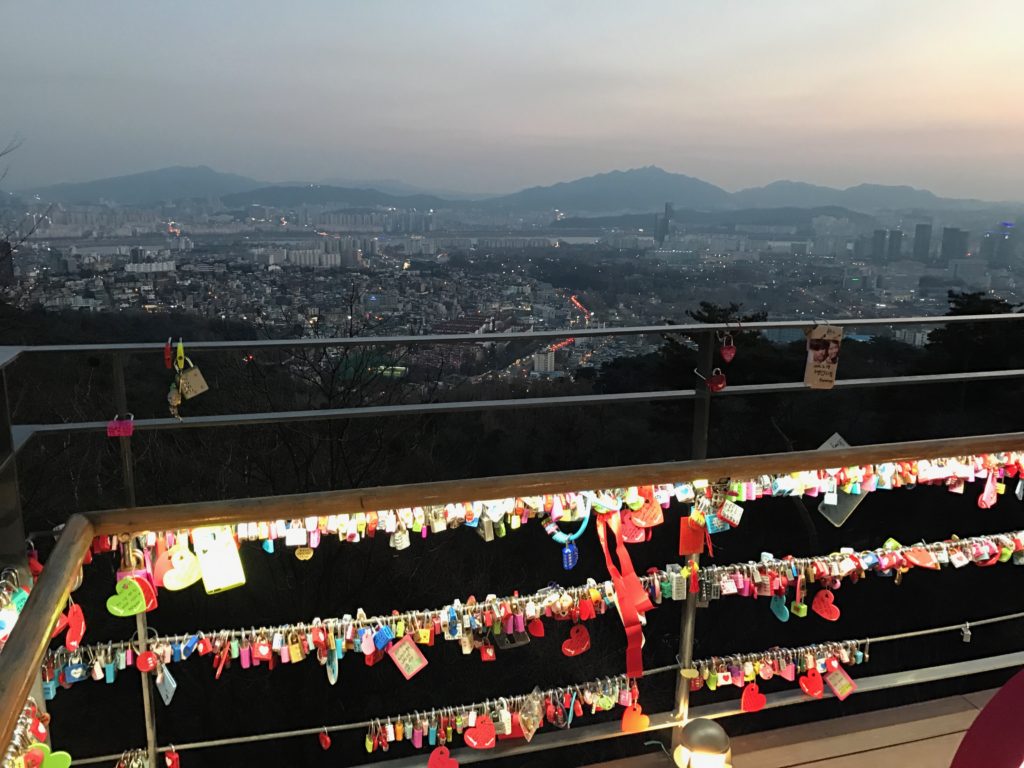 I would recommend skipping this attraction if you’ve been to other towers in Asia. But, if you’re insisting on going, definitely go during the day before sunset, as the views are better by day than night. Also, DO NOT go on a Saturday, as it’s super super crowded. We had a HORRIBLE experience here. After waiting 40-minutes to enter, we waited another 25-minutes to get in the elevator to go up, only to be massively disappointed by huge crowds, dirty windows that were unable to photograph through and another 30-minute queue to go back down. Be sure to ask your taxi driver to take you to the entrance and not drop you at the bottom of the hill (unless you’re keen on walking 1 mile up a 12% incline—it’s not fun, trust me). Bring a lock with you to hang amongst the thousands of others. Cost for entry to the observatory is $9USD.

The Nanta Cooking Show is a non-verbal performance show with music, comedy and drama. In 2004, it made it’s first appearance on Broadway. Luckily, there are multiple locations all over Seoul and even in Jeju Island and Bangkok. Cost varies by location, but ranges from 70,000KRW ($61USD) to 40,000KRW ($35USD), depending on the seating.

You know the song by PSY….Oppa Gagnam Style! Gagnam literally means ‘South of the River’ and lies just beside the Han River. Gagnam is known as the wealthiest district in Seoul, so for posh, upscale shopping, this is THE place to go!

Gyeongbokgung Palace, built in 1395, is one of the ‘Five Grand Palaces’ and was the main royal palace of the Joseon Dynasty. Cost per entry is 3,000KRW ($2.65USD) per person. Note the last admission is one hour prior to closing.

Changdeokgung Palace is one of the ‘Five Grand Palaces’ and is set within a large park. It was built by the kings of the Joseon Dynasty. Cost per entry is 3,000KRW ($2.65USD) per person. Note the last admission is one hour prior to closing.

Where To Eat In Seoul: 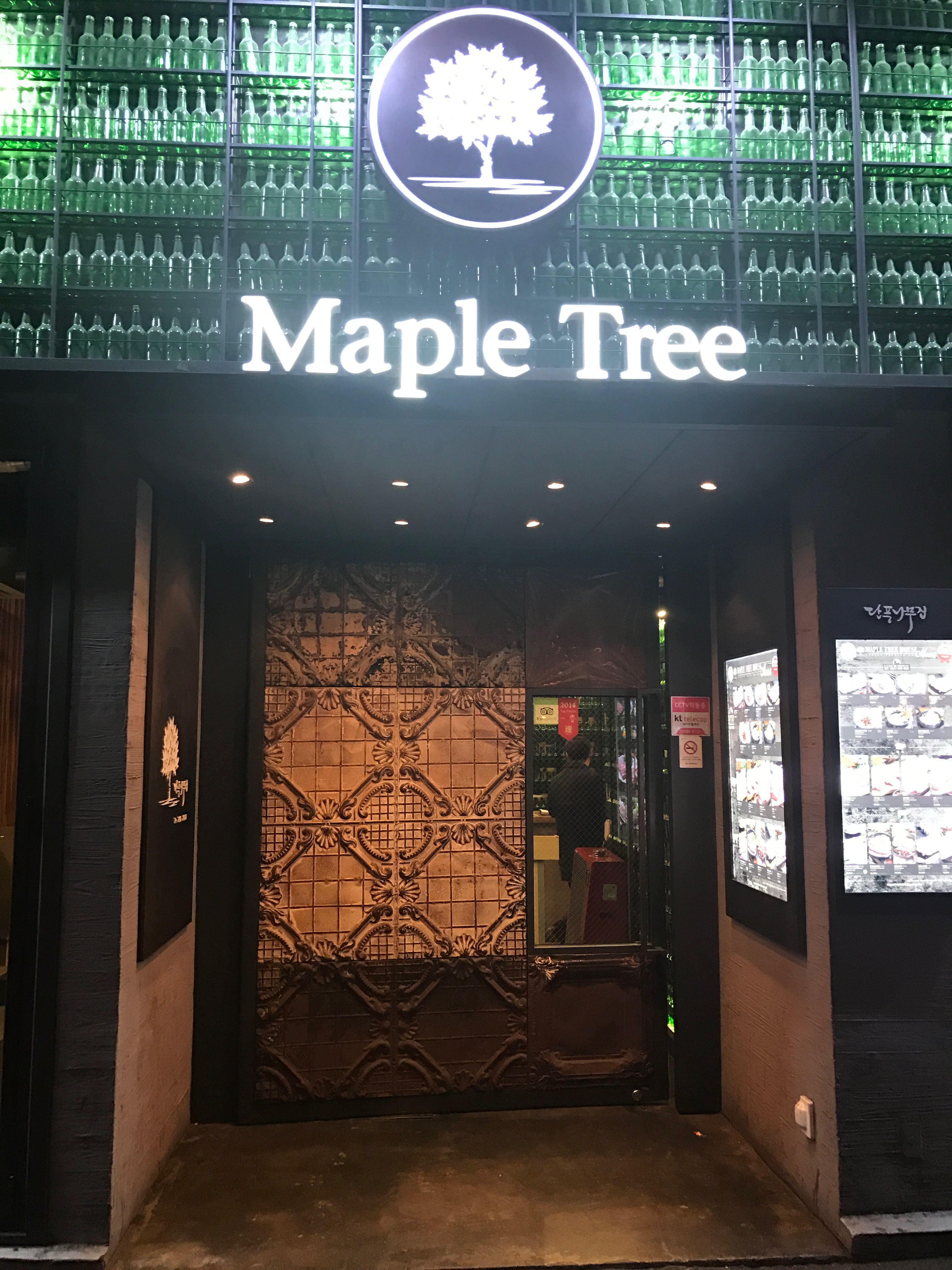 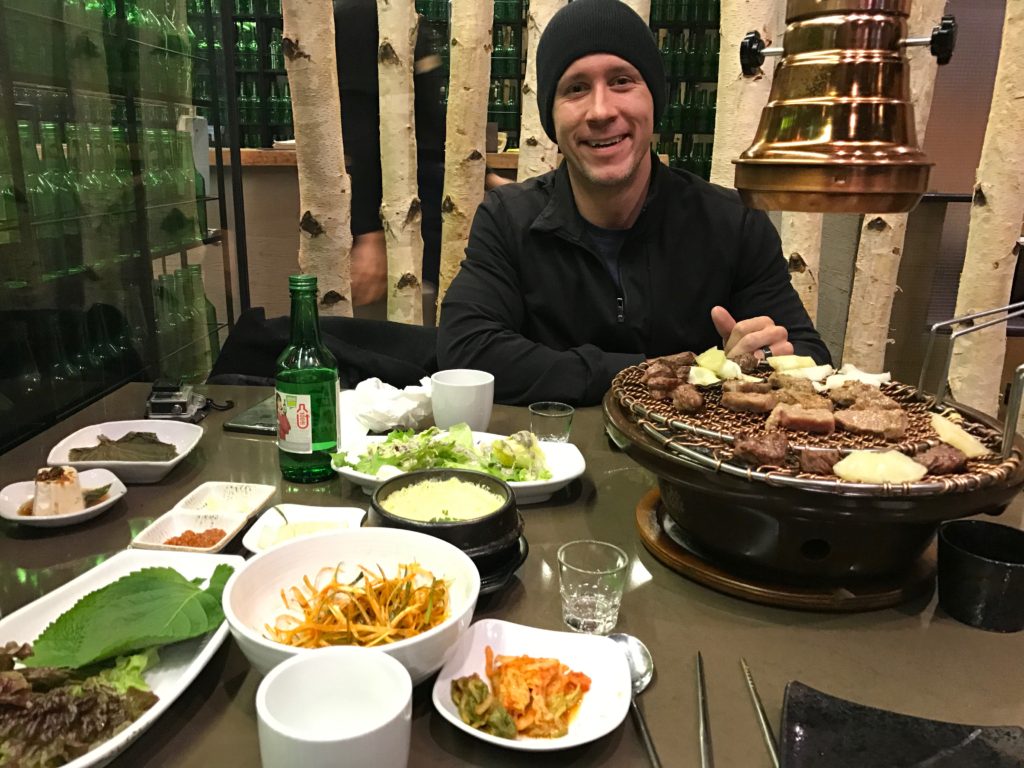 You cannot come to Korea without eating Korean BBQ (even if you’re a vegetarian!). The whole atmosphere is so fun and inviting in Maple Tree House, although it’s a bit pricey. Be sure to make a reservation, as it gets really busy!

What A Salad (Itaewon): 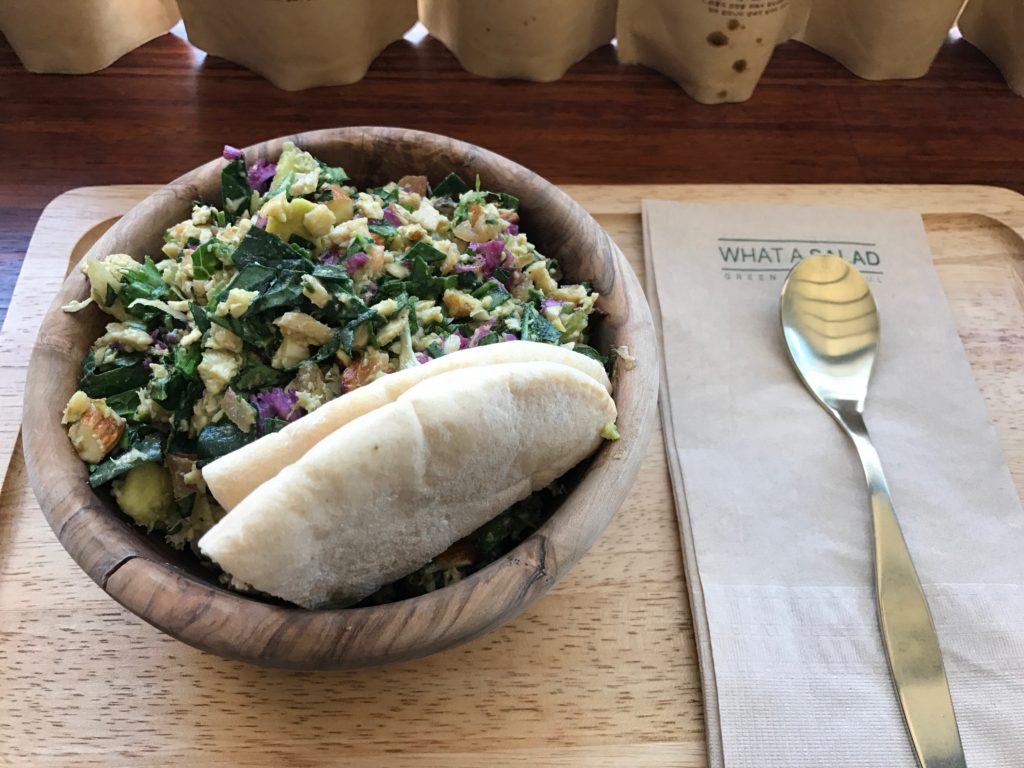 After traveling for months in Asia, we were SO excited to finally find an amazing salad spot. At What A Salad, you can custom make your own salads or choose one of their delicious concoctions. We loved this place so much, we ate here all three days for lunch. 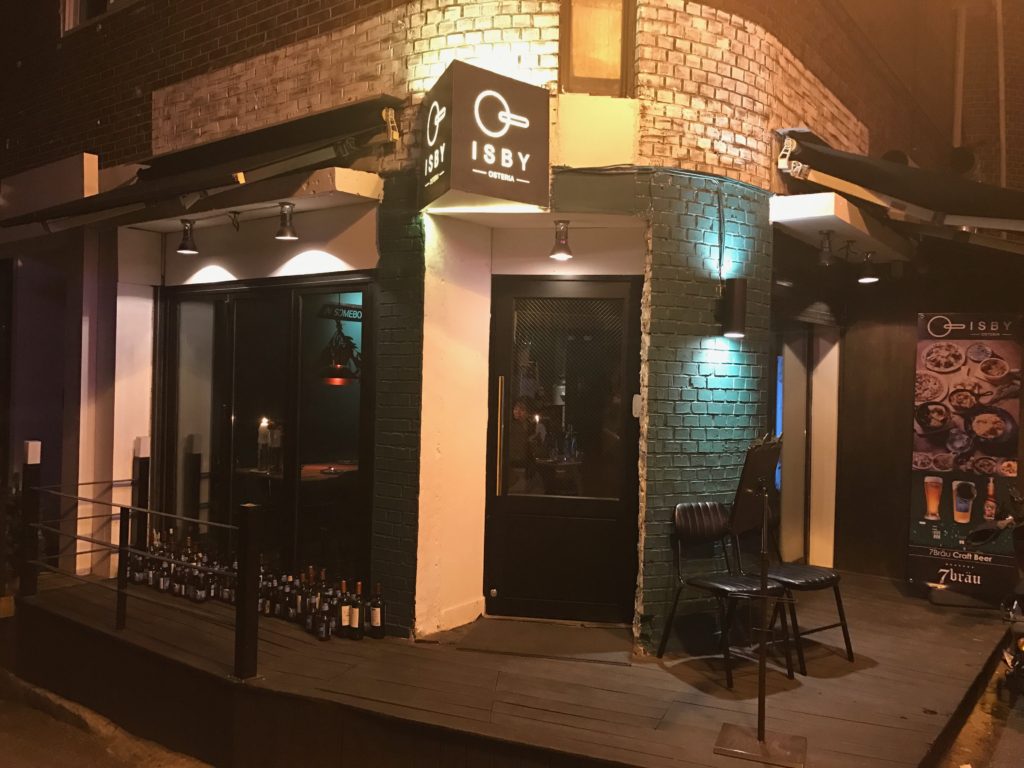 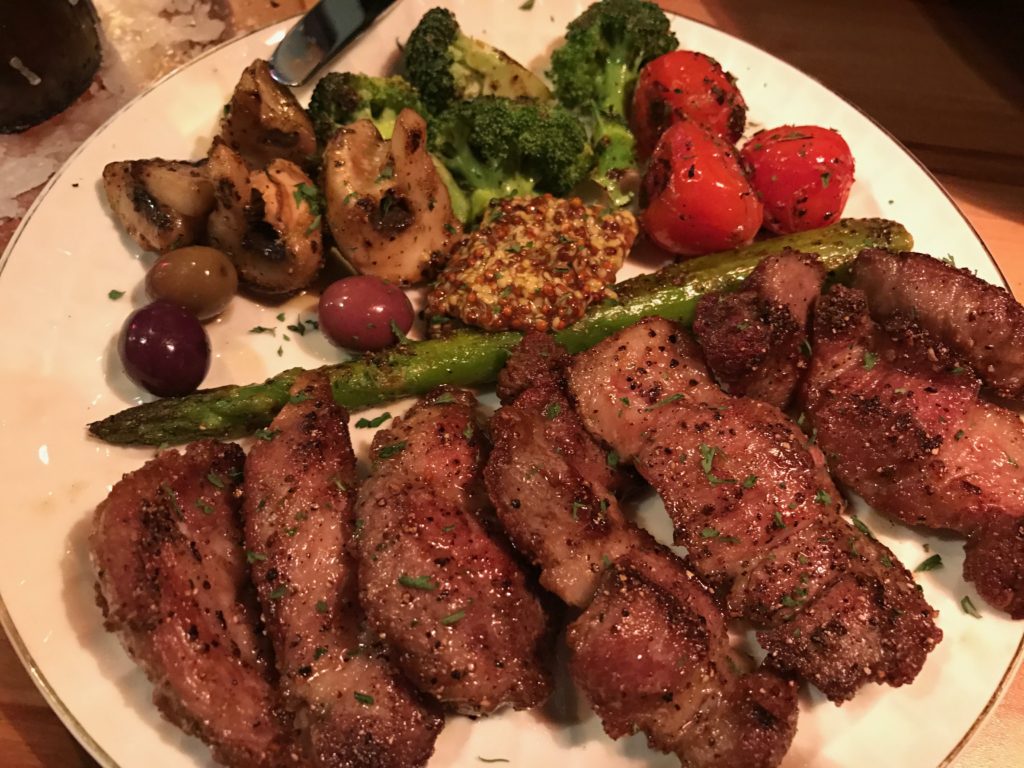 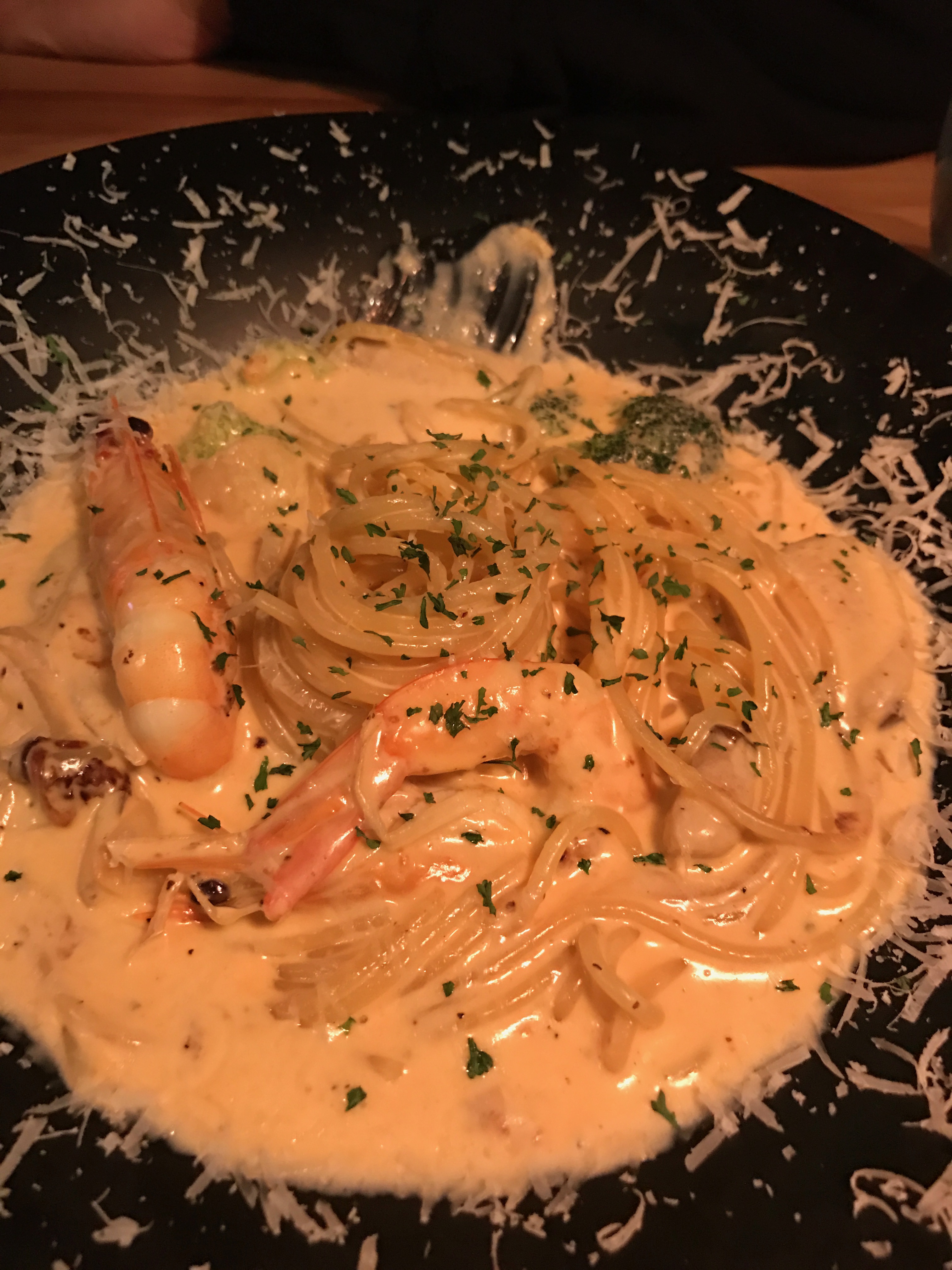 This place recently opened in Itaewon when we arrived and I cannot find it anywhere on google or social media. We had such a delicious meal there and the service was fantastic! It’s located at the corner street of our Airbnb in Itaewon, but doesn’t have a website or page. 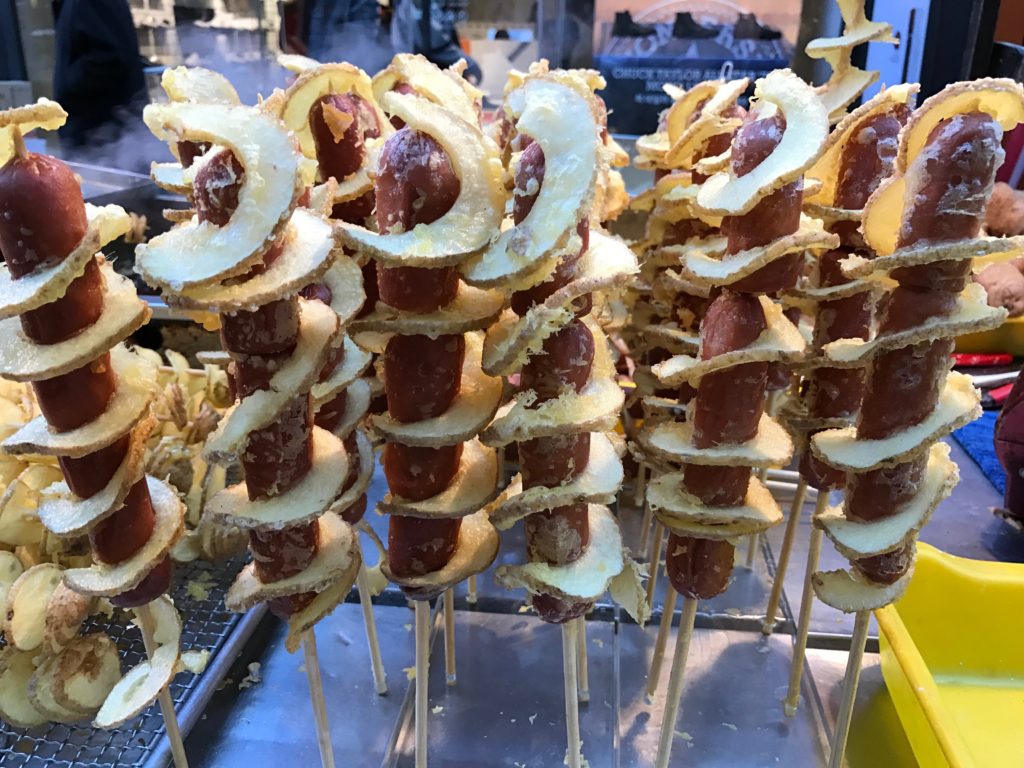 There is an INSANE amount of Western, Korean, and Eastern cuisines (and street food) in Itaewon, you’ll almost feel overwhelmed at the amount of choices! My best advice is to tap into TripAdvisor for your desired cuisine in your area or, better yet, ask a local!

A GREAT spot for drinks with a great atmosphere. It’s small in there, so it may be tough to get a table. 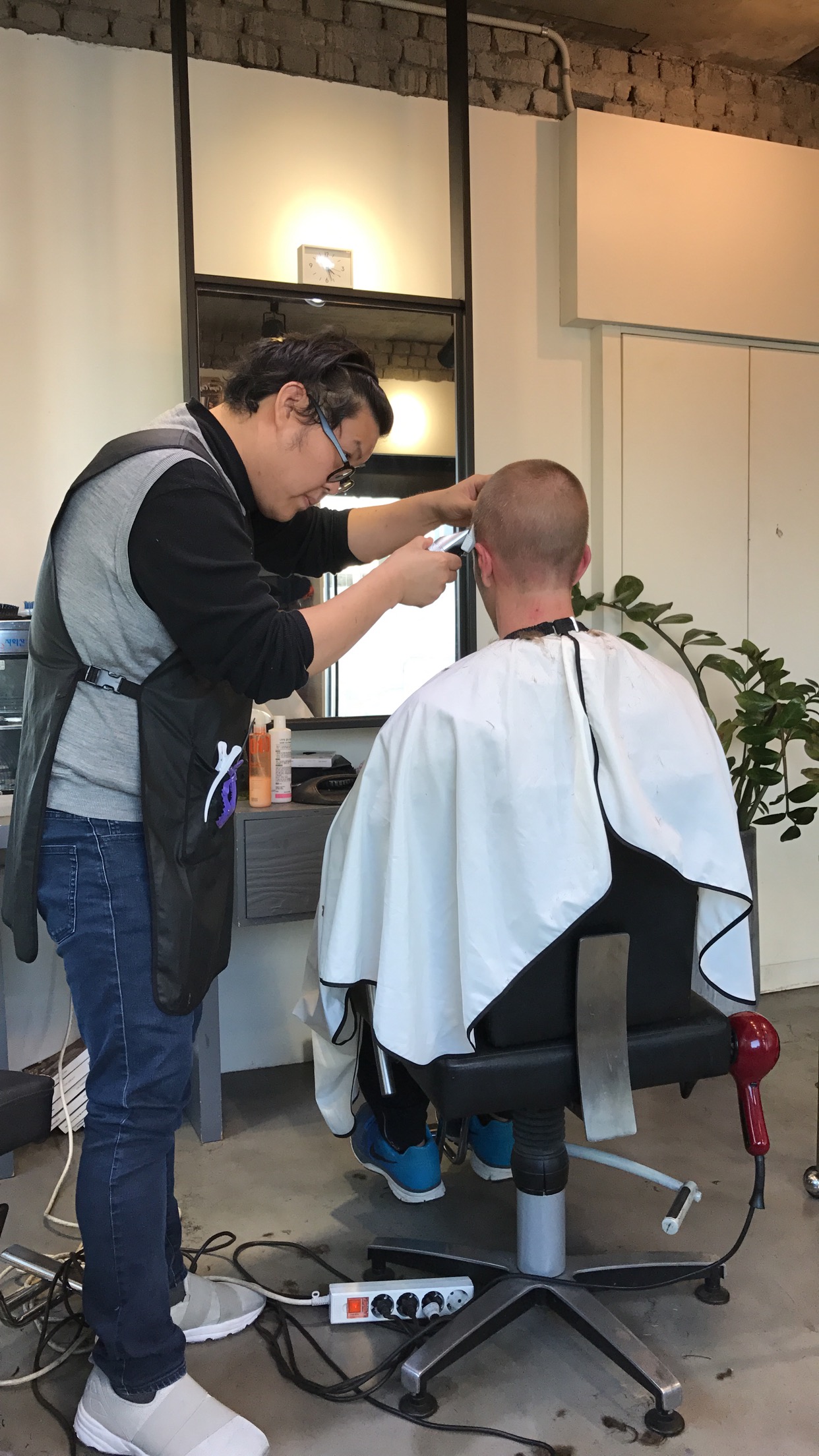 If you’re in need of a haircut (male or female) or even more, thenSalon De Michel is your man. He is super fast, efficient, affordable ($18USD Mens Cut) and his shop and his little dog are adorable. He’s located just up the hill opposite the McDonalds.

The gym at the Hamilton Hotel was our go-to spot to workout every day. They have more than enough weights and equipment to get in a great workout. The coolest part about the gyms is that they provide workout clothes when you enter, so everyone is wearing the same gym pantsuit (hahaha). $15,000KRW per use ($14USD).

Soju, Korean rice wine, is totally delicious (like the Sake of South Korea)! Our favorite flavor was blueberry…yum yum yum!

The GREAT firewall permits Google Maps from working here, so getting around is a challenge if you’re addicted to your app like I am. Maps.Me App is a better choice in South Korea.

Skype works if you want to make calls in South Korea, but if you need to add credit, it won’t work unless you log into a VPN, or just pre-load credit prior to arriving in South Korea.

Seoul is the headquarters of companies like Samsung, LG, Hyundai and Kia, which make up 20% of South Koreas GDP.

In Korea, babies are considered one year old at birth.

Only 3.2% of South Koreans are overweight, which ties the country of Japan for the lowest percentage in the world.

South Korea is famous for its practice of “crime re-creation.” Citizens suspected of crimes such as rape or murder are led by the police in handcuffs to the scene of the crime and ordered to publically reenact the crime. To make the reenactment even more humiliating, the media is also invited to take pictures and publish details about the crime.

The microchips for Apple’s iPhones are made by the South Korean company Samsung.

For more fun facts, check out Fact Retriever, they have some good ones! 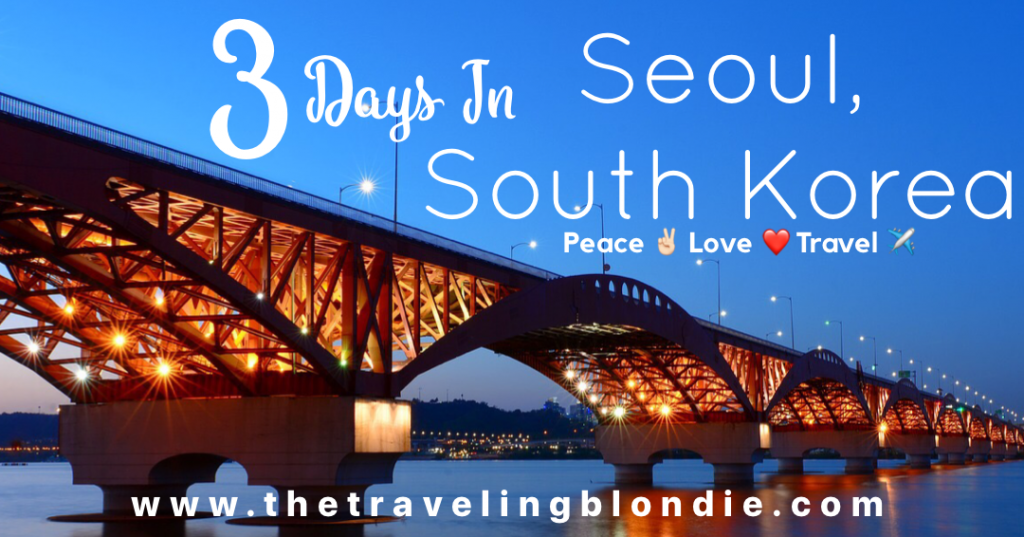